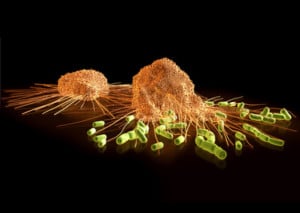 Streptococci fleeing from voracious macrophages that these seek to enclose, to include in itself (phagocytosis).

Modern medicine and research puzzle over the increase in autoimmune diseases such as type 1 diabetes and multiple sclerosis. What is seemingly completely ignored is the ever increasing exposure to cell phone radiation, this could play an important role.

Type 1 diabetes and multiple sclerosis (MS) are both autoimmune diseases. But they have something else in common: In recent years, physicians observed a strong increase of these diseases. Today, one of 120 children in Finland is diagnosed with Type 1 diabetes, which is the world’s highest rate. In Switzerland and Germany the rate is 1 in 300 of under 15 year olds says Daniel Konrad, Head of the Department of Endocrinology and Diabetology at the Children’s Hospital Zurich, on www.nzz.ch. Zurich doctors apparently observed  an annual increase of three to five percent since 1998.

In type 1 diabetes, the immune system attacks the insulin-producing beta cells in the pancreas. For a while the body is able to compensate for the loss. However, as soon as 80 to 90 percent of the beta cells are destroyed, there are strong exhaustion symptoms. However with the daily supply of insulin using a pump in conjunction with a highly controlled diet, it is possible to get the disease under control. Nevertheless, it is a great burden for those affected.

What are the reasons for the increase in autoimmune diseases such as type 1 diabetes or MS? According to the report on nzz.ch certain gene variants increase the risk of someday developing them. Such a rapid increase of these diseases in the last 50 years can not solely be explained by genetics, say the experts, and suggests that certain environmental factors in conjunction with the genes lead to irritation of the immune system. Infections by viruses, cigarette smoke, a low vitamin D level, the stress on the body with heavy metals, solvents, pesticides or nitrate are all named as potential environmental factors. With the so-called microbiome advanced in recent years, another prime suspect has moved to the center of research. Microorganisms play an essential role in the body’s defences.

What role does the cell phone radiation play?

Even with MS, it seems to be more complicated. Many factors are involved. “We are caught in a very complex system,” says Bertram Müller-Myhsok from Max Planck Institute of Psychiatry in Munich on nzz.ch. Amongst the numerous environmental influences and other factors that he names, widespread exposure to electromagnetic pollution, in particular by the high-frequency radiation from the cell phone sector is not mentioned. Why not? Within two decades wireless technology has become a worldwide epidemic. According to statista.com 190.5 million people possessed and used a smartphone in the USA in 2015 with a strong upward trend. In 2013 the Swiss Federal Statistical Office, stated that 94 percent of Swiss households have a cell phone, and more than half of these households (57 percent) have more than one device. can this e a source for autoimmune diseases?

There are many studies on the harmfulness of cell phone radiation, especially the effects on the immune system. Dutta et al. (1989), for example, describes, according to a report on www.zentrum-der-gesundheit.de, changes in the calcium ion balance and the nervous tissue of birds and cats as well as in human neuroblastoma cells. A disturbance of the balance in the calcium ions influences, among others, cell communication, and cell growth. Daniells et al. (1998) found damage to intercellular protein in roundworms under microwave radiation. It has been established beyond doubt that microwaves even at low intensity causes more violent stress than simple heat. Fesenko et al. (1999) subjected mice to a whole body irradiation of 1 pW/cm2. This influenced the immune system significantly. Lyle et al. (1983) also found that RF radiation causes a reduction of the cellular immune function. In tests on rats conducted at the Catholic University of Leuven (KUL) in Belgium, changes in blood cells, which are responsible for the immune system were found. Rats exposed to prolonged radiation would, exhibited twice the mortality rate in a series of tests, reported the Belgian newspaper “Le Soir”.

“Swiss Harmony” products for the harmonization of homes ensure that its electricity contains a different information. Via the law of resonance, it transmits the information of the visible light spectrum onto the electricity that flows past it. This electricity will then distribute this harmonious information into every last crevice of the building. Any plugged in WiFi or cordless phones you have in your home will become a beacon of harmony.