Baby monitors are practical. It is a relief for parents. However, the devices also pose risks: The high-frequency radiation harms children and parents at the same time – similar to the cell phones. 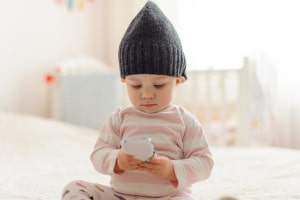 High frequency radiation in the nursery

It’s a good feeling to know that thanks to baby monitors etc.  you, as parents, can leave the nursery while the child is sleeping but still keep a watchful eye/ear. This “feels good” but has its downsides: The baby monitor relies on DECT technology, which we know well from cordless telephones. Consequently, the child and the parents are constantly exposed to the high-frequency radiation of it. In contrast to the cell phone that is the sender and receiver, there are always two terminals when dealing with baby phones: one is located next to the baby, which is the “always on” high-frequency EMF transmitter and the receiver station, wich is with the parent. Anyone who uses a baby monitor like this, effectively is installing a cell tower directly in their home.

High-frequency radiation in the nursery from Baby Monitors

In 2011, K-Tip in collaboration with the laboratory PZT in Wilhelmshaven (D) conducted a test with eight baby monitors. Four of the devices tested were equipped with outdated DECT technology (Philips, Topcom, Switel and Chicco). According to the report, the devices send continuously and result in pulsed high-frequency radiation. The permanent pulsed radiation does not have to be there if you take a look at modern DECT devices. They continuously adjust the transmitted power depending on the distance between the handset and base station. “As long as the baby monitor always transmits, such a device should not be placed near babies or small children,” said the study’s director Wolfgang Herter to K-Tipp. Apart from a sufficiently large distance between receiver and child it is also recommended to run the baby monitor on batteries. Even a power supply and cables contribute to radiation exposure. The K-Tipp-Test states that if the device has an eco-button, it should definitely be selected.

Do not use devices that send continuously

In any case – in addition to cordless telephones – baby monitors should also be considered as a health hazard, especially for babies and children. The Swiss Federal Office of Public Health (BAG) recommends to keep the radiation exposure of a child as small as possible, to not use any devices that send continuously, and to have a distance of at least 50cm between a transformer and the cot. Additionally, according to BAG, the long-term effects of this type of radiation on children is unknown since, for ethical reasons, no long term tests may be carried out with children.

In 2014 a US study confirmed the risks to children due to radiation exposure from smartphones, tablet computers and WiFi. According to the study by Morgan, Kesari, Davis, under the title “Why children absorb more microwave radiation than adults: The consequences” children of today that are still in the embryonic phase are indeed passively exposed to non-ionizing microwave radiation from cell phones, DECT phones, and WiFi. Neither the dosage level, which is acceptable for children nor the consequences of the radiation are known. Due to their body size children make for other “antennas” than adults. The study also states that they have a different water content, thinner bones and a more active metabolism. Diagnose-Funk e.V., the environmental and consumer organization for protection against electromagnetic radiation, which translated this study to german says: “Due to the growth rate of the baby, cell division takes place much more frequently, precisely during the division cells are particularly vulnerable and susceptible to influences”.

Diagnose-Funk e.V. also says that many studies show children to absorb more microwave radiation than adults, even twice as much in the head. In children, aged between 5 and 10, the radiation penetrates deeper into the brain, because the skin and skull bones are thinner. Several studies also found a significantly increased risk of brain tumors from cell phones among children and adolescents. The industry itself has started to warn people that the devices should be worn at a certain distance from the body, otherwise the limits could be exceeded. But the problem is also with the limits themselves: These have not changed since 1986, although a large number of scientific studies – according to Diagnose-Funk e.V. – have found risks even below these limits. The limits are set by organizations that have no medical background, but an industrial one.