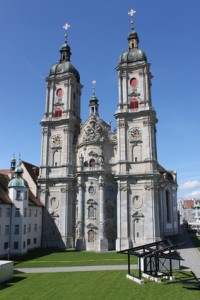 The city of St. Gallen has a unique way to deal with cell phone technology. Picture: Fotolia.de

Many people are worried about the increasing exposure to radiation from cell phones. Luckily, there is hope and innovation in dealing with this invisible danger. Three of these are presented in the following article.

Due to the heavy use of data-intensive services, the transmission systems in many cities are used to their performance limits. In order to reinforce the infrastructure for the conventional technology of macrocells (conventional cell phone towers) further, the Swiss cell network operators and their associations are trying to, according to a report by www.diagnose-funk.org, increase the limits for non-ionising radiation at a political level in order to continuously upgrade the existing macro cell sites.

Instead of continuing to develop the network of cellular antennas, the decision was made to take a different route. On behalf of the Office of Environment and Energy, of the city of St. Gallen a vision was developed: St. Galler-Wireless. The idea is fascinating, more data with less radiation. The project was designed consequently the city council convinced and approved by the people in a referendum. Strong resistance came from the cell operators that described the project to be technically impossible. But the vision has been successfully implemented so far.

Only one network for all cell phone users

In 2014 the project was switched to normal operation. St. Galler-Wireless fulfilled, according to the report on diagnose-funk.org four important requirements for creating a powerful and low-radiation cell phone network:
– There is only one network for all users.
– With a small cell network, the wireless gap is kept as short as possible.
– The indoor and outdoor supply is separated.
– Router/access points are shielded and mounted so that the radiation is avoided or minimized in buildings.

In practice, the project appears to be a success. The cell phone, smart-phone and tablet users can communicate via free urban WiFi network consisting of micro transmitter/receiver (Cell), and is then deflected internally to its respective provider. This way the maximum radiation exposure could be greatly reduced in the outdoor areas. Since the user is always close to a wireless cell the distance can be bridged with minimal power, both from the cell and the user. Compared to conventional services, this is a threefold progress: Since the radio cells transmit at low power, the radiation exposure remains low even in the immediate vicinity of the transmitting equipment. The apartments are no longer irradiated from the outside. The terminals can receive and transmit with little power.

The Fraunhofer Heinrich Hertz Institute (HHI) in Berlin has developed a data transfer technique in which the light of commercially available LED lamps, which are usually used for room lighting, is used as a transmitter. The wireless signal transmission works with an embedded microchip in the LED light bulb as a result this allows for a transfer rate of 150 Mbit/s.

The data is modulated onto the light flux at very high frequencies. These frequencies are not perceptible to the naked eye. Optical sensors (photodiodes) on the terminals are used to read the data from the luminous flux leading to the data streams being sent back from the cell terminal in the infrared region of the LED lamp. The wireless optical data communication is an impressive alternative to existing data transfer with WiFi and Bluetooth. It represents an attractive solution especially for schools, as special requirements concerning the protection of minors are present against the risks of cell phone radiation and must be considered.

The idea to change to visible light from the more traditional microwave radiation, originally came from Keio University in Japan. Meanwhile, it has spread worldwide.

First European VLC project on the island of Mainau

On May 20th 2015, on the island of Mainau in Lake Constance began Europe’s first practical project with optical data transmission – the visible light communication (VLC). This may be the beginning of a new stage for the cell phone industry. In the press release of the project partners it is said: “The Fraunhofer Heinrich Hertz Institute HHI upgraded an existing conference room on the island of Mainau with visible light communication (VLC) technology in order to create therewith an optical WiFi environment. Therefore, the existing radio-based WiFi solution can be replaced. The upgrade will take place in several construction steps and allow insights for practical parameter optimisation. The project is funded by the Ministry of Environment, Climate and Energy Baden-Württemberg. The initiative “Bodensee Mobilfunk” campaigns for radiation reduction and was the one who suggested to pilot the idea on the island of Mainau.