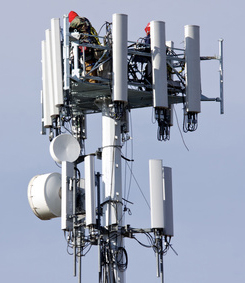 In the fight against cell phone radiation, residents often have to fend for themselves.
Picture: Fotolia.de

When it comes to the protection of the population against the consequences of cell phone radiation, the authorities are anything but quick. There are two cases (on gigaherz.ch) that take a closer look.

According to a report by André Masson on 17 December 2015, Gigaherz.ch, when it comes to anything that speaks out against cell service, the authorities act most “obtuse”. the same applies to so-called squinting antennas, i.e. antennas with beamforming. The keyword here is: “beamforming”. The transmitting antenna no longer radiates in one direction as before, but has the ability to be variable: Electronically the caller is quickly followed at any time to serve with a stronger signal. In Langenthal, Switzerland, SUNRISE/HUAWEI have apparent plans for a facility that is equipped with new antennas. Per Sector, two previous antenna systems would be re-assembled in a single, wider housing. Due to the time delay of a signal the overall beam can be deflected laterally, according to the report on gigaherz.ch, this has long been a standard procedure for radar.

Are the limit values for cell phone radiation actually met?

In the case of squinting antennas, one would have to double check the radiation levels in nearby apartments. A check that SUNRISE/HUAWEI has not conducted in Langenthal. Objectors criticize that analysts just expect a “straight” single beam, just like before. This fact was criticized in the appeal, but allegedly fell of deaf ears with the authorities. After a back-and-forth between the cantonal and federal authorities, beamforming will be prohibited. However, in the building permit, the replacement of the electronic equipment is permitted according to the report on gigaherz.ch – it would not have to be reported to the authorities, and can happen without new procedures …

Even the Supreme Court opens its doors for even more exposure

In its most recent judgment, the Federal Court has now granted putting up monster antennas with very high ranges surrounded by residential areas, as Hans-U. Jakob writes in his report from mid-December 2015 on gigaherz.ch. By judgment 1C_7/2015 from November 6th 2015, the Federal Court had definitively departed from its previously sacred intent that cell towers, if these are to be installed in residential areas, may not serve areas of “a different purpose” or “foreign territories” such as country roads, highways, railways, agricultural areas, forests or even neighboring municipalities. The installation of a few monsters antennas were prevented owing to this intent. Even with the assistance of Gigaherz.ch, this principle has now seen the end of its lifespan.

According to gigaherz.ch there is a consolation prize for the residents of future monster antennas. Despite the judgement: In the recitals point 3.5 it allows communities, in their community-building regulations, to limit the construction of cellular antennas in residential zones. They can insist that the antennas have a functional relation to its area and must comply with those features of its duration and its performance, which is common in purely residential areas. However, such a restriction presupposes an appropriate cantonal or municipal regulation regarding residential zones.

Conclusion: If people want to protect themselves from the effects of cell phone technology, they are often fighting a losing battle. One one hand there needs to a high degree of initiative and persistence, on the other hand, anyone can protect their environment to some degree themselves – for example, through the economical use of these technologies or protection in their own homes with targeted shielding or harmonization measures.