Dangers of Wifi: for man and environment 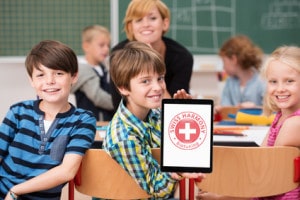 Various studies warn of the dangers of Wifi, especially for children and adolescents.Nevertheless, the introduction of Wifi is planned at schools. The authorities hide behind radiation limits and an “inadequate state of research”.

In Switzerland, the new “curriculum 21” stipulates that children in kindergarden and in primary school are taught the use of new media technologies. This should happen in conjunction with computers and notebooks as well as small mobile devices, which are connected via Wifi to the Internet. The “Basler Zeitung” and “20 Minutes” reported, these plans where met by criticism with the “Syndicate for Necessities of Life” (IG) as well as with the Swiss Syndicate of the Electro-affected. They warn of the adverse health effects of exposure to radiation from wireless and mobile phones. A few years ago, an experiment was started to introduce nationwide Wifi in English schools. However, it was soon found that level of learning and wellbeing of students was affected. Aggressiveness and lack of concentration were the result! The project was quickly stopped – just like in Austria, where they had a similar experience with Wifi in schools.

Free harmonization to help against the dangers of Wifi

To counteract the wireless radiation exposure in schools, “Swiss Harmony” offers free harmonizations of schools who suffer from radiation exposure. Unfortunately, many teachers are still not sufficiently aware of the dangers of Wifi at schools, according to the director of Swiss Harmony, Richard Neubersch. He says “We have teachers as customers who are extremely satisfied with our products and they want to implement the harmonization in their schools but more often than not it fails because of the lack of support from their fellow teachers. They are laughed at because their colleagues do not believe in the harmfulness of electromagnetic pollution.” The least a school can do, is to harmonize all the wireless routers of the building in order to minimize the health burden on children, says Richard. The product of choice in conjunction with the smart phones in everyones pockets, he suggests the “Biopatch“.

There is no lack into investigations and studies on the effects of electromagnetic radiation. For example, in issue 10/2003 the magazine Ökotest (www.oekotest.de) carried out measurements to determine the effects of wireless radiation. Result: even at one meter from a Wifi receiver values were measured that, according to studies, impair motor skills and increase memory disorders in children. According to the study, even up to a distance of 15 meters, field strengths are often still far higher that the official building-biological thresholds for places of work or places where you spend a lot of time. Meaningful measurements for the determination of wireless radiation was conducted by the University of Bremen on their campus, where a dense network of wireless reception points was established. The measurement results showed large variations: they spanned from 0.5 to 2504 μWatt/m2 at the receiving points. On a laptop at a distance of 1.50 meters, a value of 1580 μWatt/m2 was measured and at a distance of 0.10 meters a frightening level of 49960 μWatt/m2.

Irradiation of the reproductive organs

Wifi is fast becoming the most used communication frequency; everywhere free access (hotspots) are offered. The Smartphone sends and receives almost constantly because of active apps, usually via Wifi. By keeping the smartphone close to the body, in the trouser or jacket pocket, then according to studies, the reproductive organs are constantly irradiated. Research by the environmental and consumer organization to protect against electromagnetic radiation “Diagnose Funk” based on six recent studies (Cammaerts 2014, Dasdag 2015, Megha 2015, Saili 2015, Sangun 2015, So-ran 2014. Dasdag et al.) have shown, that the wireless frequency of 2450 MHz causes the most harmful effects. Apparently, the percentage of defects in sperm heads rose significantly in the irradiated group. The weight of the epididymis and seminal vesicles was significantly less, the diameter of the seminiferous tubules and the thickness of the tunica albuginea had decreased significantly, even highly significantly in the exposed animals. Further, the effects of 900, 1800 and 2450 MHz were tested on the brain. The maximum damage was achieved with Wifi: oxidative cellular stress, reducing the body’s antioxidants, inflammation, and as a result of oxidative stress DNA damage. In a long-term experiment, researchers found that there is delayed development in the postnatal period, when the embryo is irradiated.

Damage in animals and plants

Industry likes to claim that all pathological reactions are due to nocebo effects. In animals and plants, however one can not assert this thesis. When irradiated, ants showed disorders in their movement sequence. In another research project field beans were irradiated with 915 MHz. DNA damages were the result. With maize seedlings, irradiation resulted in stunted growth, leaf changes and effects on the mitochondria; these are special cell organelles with a double membrane.

On the subject of the dangers of Wifi, the Swiss authorities (Federal Office of Public Health, Bundesamt für Gesundheit BAG) say: According to current knowledge, and due to existing exposure measurements generated by wireless networks, high-frequency radiation is too weak to detectably increase the temperature through absorption and cause acute health effects to trigger. Long-term and non-thermal effects are still insufficiently explored. From the available studies on the effects of high-frequency EMF at low doses, below the applicable limits no health hazards caused by wireless networks can be derived at the moment. Individual wireless devices such as Wi-Fi enabled laptops, mobile phones and PDAs can cause prolonged radiation exposure when worn close to the body. At the moment according to BAG, there are uncertainties on the health effects of such body near devices. In connection with mobile phone radiation, they are extensively studied in international research efforts.