Electrosmog in the car and Tyres

Exposure to electromagnetic pollution in a car is often underestimated. Although research and even experiences of those affected show that the modern technologies in vehicles are a cause for increased radiation levels and electrosmog. 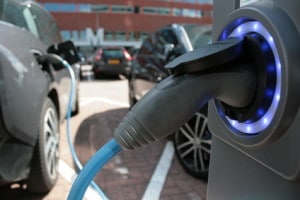 Electric/Hybrid cars as well as normal ones are sources of electrosmog. The charging stations also send out large amount of electric impulses. Photo: Fotolia.de

“The other day we drove a rental car from Avis (new Mercedes C class), but we did not get very far. Severe headaches plagued us shortly after commencing our journey. We changed the car without further ado. The Avis staff explained that some people had problems with the electromagnetic pollution due to the increase in technology …” This report of a sufferer who posted in an internet forum shows that electromagnetic pollution has not only been a problem in buildings and public transport, but also in private vehicles.

Study of the University of Applied Sciences in Biel

There are steel inserts in car tyres that are magnetically charged, whilst driving they produce magnetic fields. According to a Study of the University of Applied Sciences in Biel these, from a health perspective, problematic fields amount to about 3000-10000 nanotesla. This means they are several times higher than the threshold for new high-voltage lines in places like homes and schools. For them, 1000 nanotesla apply.

Whether the low frequency magnetic fields produced by the tires pose a health risk is not known, this is announced on the website of the Technical Information Point on non-ionizing radiation (German) from the Swiss Federal Office of Public Health (BAG). People who want to sort out this problem pre-emptively, can now de-magnetize their car tyres in a few specialized garages in Switzerland.

Other reasons for an electrosmog increase in the car can be found when looking at the vehicle technology available today: More and more vehicles are crammed full with electronics. This serves to coordinate all assistance systems on board. These include, for example, dynamos, seat heaters, ignition systems, miles of cabling, central locking, rain sensor, automatic light, a lot of electric servomotors, ventilation / heating control, anti-lock braking system ABS, Electronic Stability Program ESP, sensors, microprocessors, board instruments, sound systems, diagnostic systems, electronic brake assistant and more. Additionally while driving you also have the exposure to radio waves, triggered for example by the navigation system with GPS, car phone, cell phone, Internet, multimedia systems, television, etc.

Even more technology, even more radiation

It is said that an intelligent Strobe headlight system is in development that will direct the light, according to measurements with a high-speed camera, around hailstones, raindrops or snowflakes.

Experts expect that electrosmog in the car will increase significantly through the development of robotic self driving cars in the future.

The number of electric cars on our roads will increase sharply in the future. This, in itself, is a positive sign and a great development, but with electromobility the amount of electrosmog sources are set to continue to rise. Not only the electric cars themselves are sources of electromagnetic fields, but also the increased amount of charging stations send electrical impulses into the environment.

The Result: The passengers are not affected by static electricity and the ever-increasing electrosmog.

A recent study by the emissions experts “Emissions Analytics Ltd.” in London has shown the CarTuner also reduces fuel consumption and the CO, CO2 and NOx emissions. The report can be found here.