Mobile technology and the social dimensions 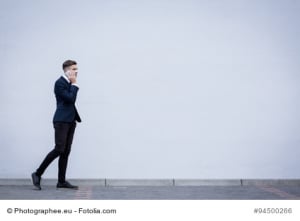 Phone at the ear: Many people use mobile technology with out being aware of the dangers.

This development, for example, is brought to the point by the Protestant theologian Werner Thiede in his two books. In his book Mythos Mobilfunk, 2012 (Mobile Myth), the author discusses, among other topics, the seemingly magical moments of seductive mobile technology. Where is human reason? Werner Thiede asks. This question is more than justified if you are aware of the social functions of the mobile and the gigantic growth in the Smartphone & Co markets. Why do policy makers and the authorities protect this mobile myth?

The consequences of mobile technology have long been known

83 years ago we already knew about the effects of radio- and microwaves used in mobile technology. In August 1932, the German physician Erwin Schliephake published a paper in the “Deutsche Medizinische Wochenschrift” containing scientific data about the “microwave” or “radio wave sickness” caused by radio transmission equipment. He described them with the following symptoms: severe tiredness and fatigue during the day, restless sleep at night, headaches that range from small right up to the unbearable, and high susceptibility to infections. In the opinion of Schliephake these symptoms were not due to the thermal effects, but to the athermal effects of high-frequency electromagnetic radiation. The harmful effects of high frequency electromagnetic and electric radiation was reproduced in thousands of investigations. According to a report by Pravda-TV this so-called microwave sickness was confirmed and published in many languages (Russian: 1966 and English: 1970) by the scientific work of the Russian author Zinaida Gordon from the Moscow Institute of Industrial Hygiene and Occupational Diseases.

Investigations Buried in the Archives

In 1996, Professor Karl Hecht, from the German Federal Institute for Telecommunications, received a contract to conduct a search of Russian literature on the health and biological effects of high frequency electromagnetic radiation. The data of the report, which was finished in 1997 and was based on 878 scientific works, apparently was so overwhelming that the report disappeared in the German archives. To date, countless studies on the dangers of mobile phone radiation have been published. One study, for example, which was funded by the International Agency for Research on Cancer in France in 2008, found that the probability for adults to develop a brain tumour on the side of their head that they preferred to hold their cell phone, rose by an astonishing 40%.

Recently scientists from 39 countries have prompted the UN, WHO and national governments to define strict regulations regarding the use of cell phones and other devices that generate electromagnetic fields. Nearly 200 scientists have published around 2,000 documents, verified by other researchers. They look at the health and biological effects a non-ionizing radiation, which are a part of the electromagnetic field spectrum. In a letter, they emphasize that the use of devices like cell phones can cause genetic damage, cancer, changes in the reproductive system as well as learning and memory disorders.

Call for a Europe wide change

In their resolution “The potential dangers of electromagnetic fields and their effect on the environment”, on May 27th 2011, the highest decision-making body of the European Council, the Standing Committee, called for a Europe-wide change in mobile technology policy. Herein, the European governments will be asked to do everything possible to reduce the radiation exposure to electromagnetic fields. Governments were given proposed immediate measures, such as awareness campaigns, strict rules for mobile phones in schools, a bigger say in new site selection, continuous monitoring of all systems and the application of the ALARA principle (As Low As Reasonably achievable). It calls for the recognition of harmful athermal effects of microwave radiation and as a result, the mandatory reduction of limit values ​​as well as an immediate precautionary policy.

Where are we today?

The Swiss limit for transmission installations (measured in volts per meter

[V/m]) is ten times lower than the recommended level by the WHO and the accepted levels in Germany, according to a report by the “Bürgerwelle” Switzerland. In micro-watts per square meter [mW/m2] the levels are 100 times lower in Swiss transmission installations. The experience of recent years clearly shows, however, that even these supposedly “low” Swiss limits, by far do not grant sufficient protection from the adverse effects on well-being and the medium- to longterm developments of serious diseases. It is also – as its name suggests – only for the radiation emanating from a transmission installation. The radiation emitting from other surrounding stations (mobile, radio, television, radar, additional radio services), is not considered. (fm)

The Law of Resonance states that in a resonance field any frequencies that do not conform to the field cannot form a resonance and so cannot exist in it. In other words, in a harmonic resonance field any artificial frequencies cannot have an effect. It does not matter from where they originate. The mobile products by Swiss Harmony (BioRing, BodyCard, BioBracelet, and the BioPatch) harmonize the human body by transmitting the harmonic resonance field information on the the energy system in the body. This way the body stays free from the negative effects of artificial frequencies.
www.swissharmony.com