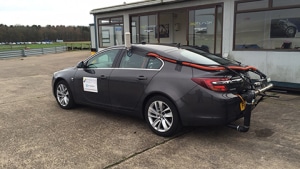 What effect does the Swiss Harmony CarTuner have on fuel consumption and vehicle emissions of a car? To answer these questions scientifically, the CarTuner was recently put to the test by the British emissions experts “Emissions Analytics Ltd.”

Result: The test vehicle consumed 4.6 percent less fuel. “That may be a little disappointing” says Richard Neubersch, CEO and developer of Swiss Harmony. What needs to be remembered is that the test was carried out within 24 hours after installation of the CarTuner. “We expect that these savings will increase, the longer the CarTuner is installed  for” said Richard Neubersch. This assumption should be verified with further tests next year.

Existing customers report fuel savings of between 10 and 20 percent. Further impressive results include the reduction of carbon monoxide by as much as 40 percent and CO2 by up to 4.4%.

The reduction in fuel consumption and other emissions is one of the side effects of CarTuner. The Swiss Harmony CarTuner was initially developed to reduce the negative influence of electromagnetic pollution by replacing the harmful information with more palatable harmonic ones. The result: Passengers are not affected by static electricity and the ever-increasing electromagnetic pollution.

Several miles of cable are present in any modern car. Up to 30+ motors are used in luxury-class vehicles to power the various amenities that we take for granted. The current trend is that the amount of motors will only be going up as car get more high-tech and automated. A large part of them have electric motors which in turn are fed by the power from the vehicle’s battery. Consequently, the vehicle occupants are continuously exposed to electric “smog” or electrosmog. This problem is known to car manufacturers. They do partially shield wires, but as more plastic and less metal is used to build cars the shielding is not very effective. This often leads to the level of electromagnetic pollution in the car being massively higher than allowed. There are big differences among the various car brands. Especially hybrid or other electric vehicles produce an increasingly significant amount of magnetic and electric fields, owing to the performance of the technology used. The consequences include headache, nausea and exhaustion at the end of a journey.